The Internet of Things: Big Data is About to Get Bigger

You can make very few things much smarter — like IBM’s Watson — or you can make a great many things a little bit smarter.

Place your bets on widely distributed little smarts? Welcome to the Internet of Things (IoT). The IoT will get plenty big. One widely quoted estimate from Cisco, an early IoT advocate, places the number of interconnected devices as between 50-100 billion “things” by the year 2020. Already, people, devices and systems generate 2.5 exabytes daily, so just how big the IoT will get is anyone’s guess.

Brief History of Hooking Stuff Up

The dream of smart devices has a history older than the public internet itself. Before ZigBee (~1998), which was proposed to network small, low power smart devices, was X10. X10 can trace its roots, which predated the home computer, to work by Pico Electronics in 1975. Not surprisingly, the X10 standard has limitations that reflect its age, such as a relatively slow speed and lack of encryption. Nevertheless, X10 proponents point to an installed base of perhaps millions of devices.

Over the past two decades, smart devices in homes have leveraged the ubiquitous Ethernet connection initially used for WAN connections. Coupled with residential Wi-Fi, many homes already have a dozen or more wired devices, most of them smart. For those able to afford it, this connectivity brings amenities. Bill Gates’ mansion Xanadu is a wired undertaking that is reportedly capable of tweaking temperature, lighting and music preferences for each individual guest.

Google’s recent $3.2B acquisition of Nest gave the internet giant access to seemingly modest technologies like smart “learning” thermometers and smoke detectors, but most observers were looking beyond the obvious IoT implications. Behind Nest, they reason, is a hardware savvy that has been lacking in Google misadventures elsewhere – reflected most notably in Google’s fire sale of its Motorola Mobility division to Lenovo. Yet it would be a mistake to focus too much on this organizational strategy alone.

The idea behind machine learning-enabled smart devices is more fundamental. Writing about Nest in Wired, Steven Levy explained that “the algorithms created by Nest’s machine-learning experts are all about exploiting the growing infrastructure of sensors and connectivity around us.” 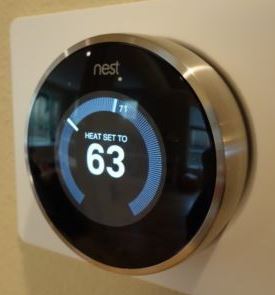 Will the party extend beyond Google’s Love Nest? The IEEE thinks so. In 2014, the association is launching the IEEE IoT Journal.

A leader in the IEEE’s own IoT initiative is Roberto Minerva, currently an engineer at Telecom Italia. Minerva told IEEE’s Kathy Pretz that IoT will require large, complex systems that will not be managed in traditional ways:

IoT’s features create a sort of virtual continuum among physical objects, their environment, and their representation on the Internet. By-products of this virtual continuum will be new services and functionality. . . Complexity will be an important factor to study and control: The behavior of every single node will need to be considered to determine its potential impact on the whole system. This will be a challenge for the entire scientific and industrial community. . . A wealth of data [blogger’s emphasis] will be generated, aggregated, analyzed, and transformed into information and distributed to users, which will require widely distributed processing capabilities and seamless connectivity.

There are other standards vying for dominance. The Message Queuing Telemetry Transport (MQTT) has been proposed as the HTTP equivalent for IoT. Cisco calls its initiative “fog computing.” Their vision is that substantial IoT processing moves to its IOx-based network devices, rather than to more distant data centers. The open source project AllJoyn aims to become “the common language for IoT.” Logistics data streams already emanate from RFID tags.

A bullish Cisco estimates the business opportunity as $19 trillion by 2020.

You’ll also need what the Programmable Web’s Twitter profile proclaims are “API’s, mashups and code – because the world’s your programmable oyster” (@programmableweb). This site’s listings will grow as IoT adoption widens.

Big Data Variety will allow existing applications to take into account new information. Road sensors can detect icy conditions and relay these to traffic management systems. Real time monitoring of microbes and water quality can improve food safety. Irrigation systems in drought-stricken areas can deliver water only where and when needed.

The IoT will likely accelerate nascent applications that leverage augmented reality and other new means for interacting with buildings, transportation and security systems – at times acting as sensory extensions of ourselves, as the ITU noted back in 2005.

The Good, Bad and the Ugly (Stuff)

Data from smart devices offers new opportunities for smart software, whether that software is co-located with the device, on premises or in a distant cloud. In domains as diverse as energy conservation, human health, agriculture and manufacturing, more intelligent decisions are possible using information gathered from sensors. When that data comes in near real-time, decision-making can be more rapid, which could have life-saving implications.

There also risks. While fears of infrastructure failure, hacking and cyber-terrorism (e.g., Stuxnet) have already been given voice, the IoT will force risk managers to recalibrate. While minutes or hours of Gmail or Salesforce outages can be tolerated well enough, the same may not true for the IoT.

Perhaps, as ISE.gov recently Tweeted, IoT will improve the ability to detect security threats and failures.

On the other hand, a vastly expanded attack surface will include the devices themselves as well as every intermediate data stop.